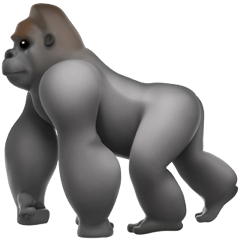 The memory of Harambe has resurfaced with the release of Apple”s latest emojis.  Among the newest offerings are additions to female professions.

There are refreshed looks to the shrug, facepalm, and a sexually suggestive peach.

It’s one of the several new animals in iOS 10.2 that stands out from all the rest.

People have associated what was supposed to be a generic gorilla to Harambe, the 17-year-old Western lowland silverback gorilla who was shot and killed at the Cincinnati Zoo after a child fell into his enclosure in late May 2016.  The incident was wildly criticized online by many who blamed the child’s parents for the gorilla’s untimely death.

On May 28th, 2016, a 4-year-old boy crawled into the enclosure of the Western lowland gorilla Harambe at the Cincinnati Zoo. The gorilla then grasped the child and began dragging him about the enclosure before a Cincinnati Zoo employee fatally shot Harambe with a rifle.

That day, footage of the incident was uploaded to YouTube, where it gathered upwards of 12.6 million views and 41,000 comments within 48 hours.  The video was subsequently removed, but several mirrored versions quickly resurfaced.  Many people were angered by the zoo’s killing of the gorilla, and there were a number of protests and tributes dedicated to Harambe in the days following the shooting.

The immediate reaction to this new emoji suggests that Harambe and his memory aren’t going to be forgotten anytime soon.