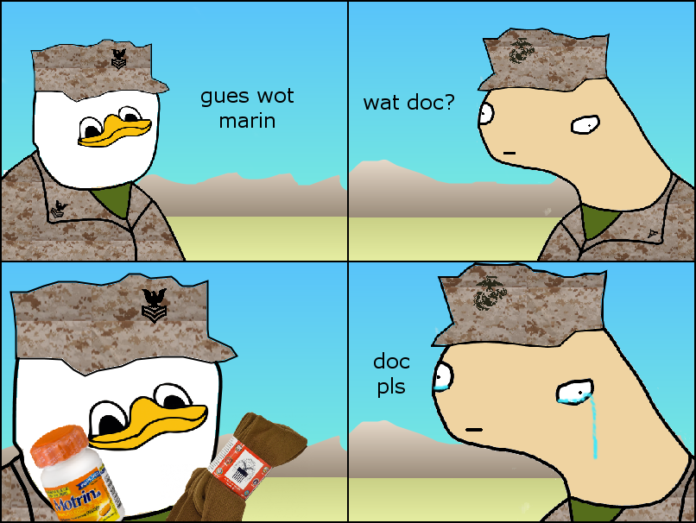 Welcome to my blog (obviously something that’s never been done before by a Marine Corps comic). This is a safe space for you to block out all the cancer that is my grammar on Facebook. On a real note this is a way for me to organize and post older Untied Status Marin Crops content and to reach out to the community on a more personal level without all the crayon-eating, glue-sniffing, window-licking spelling.

So quite often I have people asking me where I got the idea for Marin Crops. To be honest I never intended to make a comic series. I actually came across an Australian Army satire page using the Spoderman meme and thought ‘Hey, that’s pretty dank’ and made one for the Marine Corps in December of 2015. Originally intended to be a short-lived shitposting page to troll the larger military pages, Marin Crops started to grow quickly and I shifted my focus onto comics and it stuck. If there’s one thing I learned from the experience, it’s that if you can take Dolan memes from 2010 and make them popular today then you can accomplish anything in life.

Back to the current topic at hand, this was the first Marin Crops comic I posted. The shit design is on par with what an autistic kid with Microsoft Paint could make, but it serves as a reminder of the small yet notable changes I’ve made to the quality of the comics. They are Dolan memes, after all.

P.S. Before you ask what happened to Doc originally being a PO1, it made more sense for him to be a PO3. Never really did have much of a reason for the demotion except for technicalities.