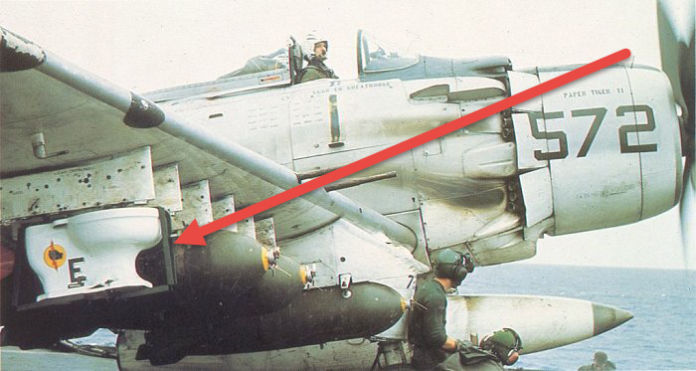 On November 4, 1965, some Vietnamese came across a very strange object that looked as if it had been dropped from the sky. Was it a bomb? Well, it had tail fins and a nose like a bomb. But it was white, and shaped like – a toilet?

In fact, it was a toilet.

It had been dropped by a VA-25 A-1 Skyraider on a mission to the Mekong Delta in South Vietnam.  It had come from Dixie Station, an aircraft carrier base in the South China Sea.  The plane’s pilot was CDR Clarence ‘Bill’ Stoddard.

As Stoddard approached his target, he began preparations for attack. He read the ordnance (list of weapons the aircraft carried) to Forward Air Control.  At the end of the list he read, “and one code named Operation Sani-flush.”

What was Stoddard talking about? The story of the toilet drop was told by Captain Clint Johnson, the pilot of another VA-25 A-1 Skyraider.  Some plane captains decided to rescue the toilet, which was damaged and set to be thrown overboard.  They dressed it up to look like a bomb, and dropped it in commemoration of the 6 million pounds of ordnance that had been used by the U.S. Air Force.  Almost striking the plane as it came off, the Air Control team said it made a whistling sound as it hurled toward the ground.  A film was made of the drop using a video camera mounted on the wing.

Just as the toilet was being shot off, Johnson said,’ we got a 1MC message from the bridge, “What the hell was on 572’s right wing?” There were a lot of jokes with air intelligence about germ warfare. I wish that we had saved the movie film.’ All U.S. Skyraiders had been transferred to the South Vietnamese Air Force by 1973. The A-6A Intruder replaced it as America’s principal medium attack aircraft.